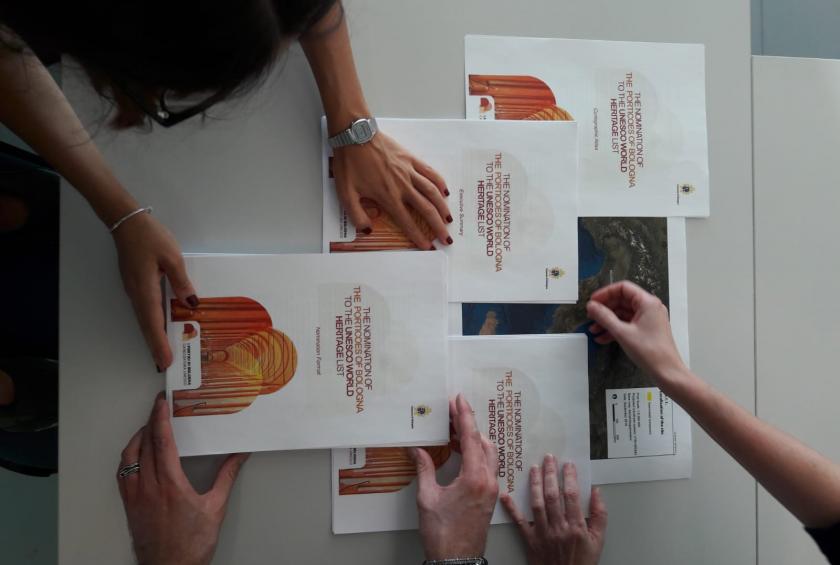 The Municipality of Bologna has attained the first goal in the process of the nomination of Portici di Bologna to the UNESCO World Heritage List. On September 12th, the preliminary dossier, which establishes the formal start of the race towards the most prestigious recognition of the world, reached its destination. The dossier, divided into 9 chapters for a total of 400 pages in English, was sent to the Ministero per i Beni e le Attività culturali e per il Turismo and by September 30th will also reach the UNESCO World Heritage Center in Paris. Now the Municipality has to await the first evaluation: UNESCO in Paris will carry out the completeness check on the submitted papers. After that, the next step will be the final delivery of the documentation, with the deadline set in February.

The preliminary dossier is not compulsory, but the Municipality of Bologna decided to deliver it and then proceed to refine the documentation, inserting any details useful to complete the formal nomination. The dossier was prepared by the Working Group established by Mayor Virginio Merola in 2018, flanked by Istituzione Bologna Musei and Istituzione Biblioteche Bologna, the collaboration of Links Foundation and the scientific contribution of the University of Bologna. The final drafting of the dossier is supported by a contribution of one hundred thousand euros by Fondazione Carisbo. The financing on the part of Fondazione Carisbo is another concrete act in support of the collective commitment the whole city is expressing.

Since Italy holds the primacy in the World Heritage List, the synergy of the institutions that collaborate with great determination for the successful outcome of the challenge is essential in order to inscribe one of the most significant and symbolic monuments of the whole city of Bologna.